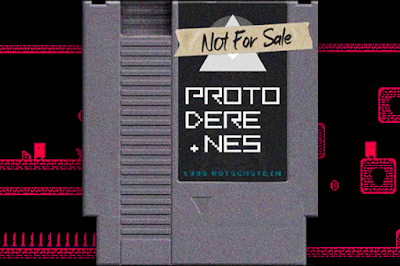 PROTO DERE is an "easter egg" game for the NES that was announced on the AppSir YouTube channel January 24, 2019. It can also be discovered after a player beats Derenoid and follows a URL trail that continues through Dere Quest 2. Like Dere Quest 2, this game can be downloaded from a link to a file-sharing website, although an NES emulator is required to play this game (Darius recommends FCEUX for PC).

This game appears to be the result of an old experiment from the Rotschstein Institute. It is labeled as a "Project by: Nancy Guerrero and Philip Rotschstein," and is dated 1985.

The game features simple NES graphics, with a character platforming from one checkpoint to another. Occasional glitch effects are noticed, such as static patches and a glitched “shadow” that gets attached to the character. Throughout the game, the player meets an entity named Sara Gentner. Throughout the game, she asks about her daughter, and she vaguely recalls participating in a study about the involving the Schumman Resonance. Sara then realizes that it’s not 1985 anymore because she remembered that the Institute was experimenting on her, keeping her trapped in a cycle in which she always gets deleted and then restored again, with each deletion causing her to forget her memories. In spite of her imploring the player not to restore her, the game was designed to delete and restore Sara with each playthrough.

Note: PROTO DERE is the official, canonical replacement of DEMO.EXE. You can read more about why the latter was created and then removed on this post written by Darius himself.
at March 27, 2019