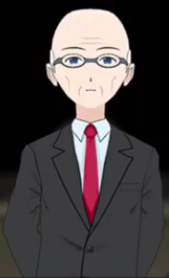 Dr. Philip A. Rotschstein was the leader of the Rotschstein Institute. References to him exist as early as 1985, when Nancy D. Guerrero worked with him to create PROTO DERE. He is also mentioned by Kia in The Other Yandere in 1999 (he also had hair then). At around June 30, 2014, he personally toured the mansion to gather paranormal data on Yanna and other spirits that may inhabit the place. At that time, he discovered that someone had broken into the mansion some time before his visit. It was also at around this time that Lilith’s brother had visited the mansion and received a tumor-like device in his brain from the TriNemesis. It was this incident that prompted Dr. Rotschstein to seek more data and unwitting human subjects for the mansion.

Between June 2014 and November 2017, Dr. Rotschstein was instrumental in “curing” Lilith’s brother of his “tumor,” and gave the brother pills to take, claiming they would prevent the tumor from coming back. Hoping that Lilith’s brother would be able to pilot the TriNemesis and operate its weapons, Dr. Rotschstein transferred Kara’s consciousness into the brother’s brain, causing the brother to meet and fall in love with Kara all in his head. The hope was that Kara’s yandere instincts and desire would augment the destructive capabilities of the TriNemesis.

On the day of the TriNemesis attack on November 2018, Dr. Rotschstein and Lilith were shot down by the TriNemesis, under the control of Lilith’s brother/Kara.
at March 27, 2019