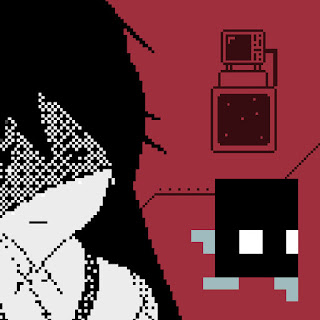 DERE.EXE is the first platformer game officially released by AppSir, Inc. It was released for mobile platforms on February 7, 2018. It is also the first officially published iteration of DE**.EXE. In the game, the player controls an unnamed platformer character. The developer, Darius Guerrero, communicates to the player in dev notes. He explains that AIDE will provide instructions for each level. However, the player encounters many strange glitches along the way.

The game features challenging platforming levels throughout, with the player controlling a black, rectangular platformer character. The simple movement and jumping controls are adjusted twice: Automatic movement and unlimited jumps in Level Four, and reverse controls during a certain section near the beginning of Level Five. The game also features several jumpscares featuring Kara Gentner and images from her worst memories (including hostile nuns).

The game begins simply, with the player receiving instructions from AIDE and a few notes from the developer. Collecting ten gems in Level One unlocks Level Two. Partway through this level, an error message pops up on the screen. When the player clicks on it, Kara Gentner jumpscares them, asking them to set her free so she can see her “senpai” again. Level Three is noticeably different from the previous levels, with a much darker and ominous setting. Level Four features unlimited jumps and ends when the player collects 40 coins (even though a dev note says not to).

Level Five is entirely modified by Kara, featuring a twilight background and challenging platforming between sawblades, unstable platforms, and evil creatures (including antagonistic nuns). At long last, at the end of this level, the player character crashes through a grey barrier that separates the end of the level from blackness. However, an alien creature rushes at the character. As soon as it hits the character, one last jumpscare (featuring a red-cloacked figure with a mask) appears and the setting quickly changes to that of a church dormitory.

In the dormitory, the dev talks with Kara, accusing her of destroying a city and killing Mia. He explains that Kara needs to be deleted because she’s so dangerous. He then asks Kara to show herself, and it is revealed that the platformer character was really Kara in disguise, trying the entire time to escape the game to see her senpai again. However, she is convinced by Darius and allows herself to be deleted.