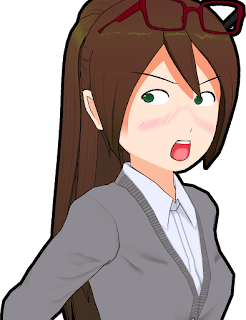 Kara Gentner is the last surviving participant of the Yandere Program, and the title character in The Last Yandere. According to PROTO DERE (a game she remembers playing before November 2017), she has a mother named Sara. She was 14 years old in 1999, when she killed a defiant Kia. Between then and June 30, 2014, Kara was the last surviving yandere since all the others were destroyed by the Rotschstein Institute when it retired the Yandere Program. She tried to escape the Institute at about June 30 (shortly after she and her assigned senpai, Lilith’s brother, were attacked by the TriNemesis at the mansion), but was captured and put into a coma state by the next week, on July 7. Lilith's brother had also lost most of the memories of his life up to that point, once he received a tumor-like device in his brain from the TriNemesis, allowing him to control it telepathically.

However, a digital form of Kara lived on in a corrupted disk of SOURCE DERE, which Darius found in the fire of the destroyed AppSir building. Yanna and Myles also inhabited this disk, and Darius worked with Yanna to try to get his revenge on Kara for killing Mia and destroying a city. When DERE.EXE was released on February 7, 2018, Kara tried to scare the player to get them to set her free so she can see her senpai, Lilith’s brother, again. Darius was able to catch Kara before she escaped, and deleted her.

Despite all this, Kara was not fully deleted, only in the recycle bin. In DERE EVIL.EXE, AIDE’s code contained Kara, and before Darius deleted AIDE, Kara was restored. If the player chooses not to delete Yanna and Myles, they can see Kara after the credits, wondering where she is.
at March 27, 2019