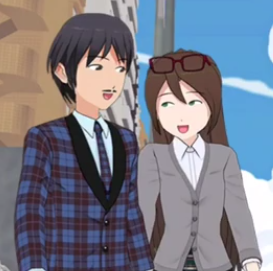 Lilith’s brother is the unnamed protagonist of The Last Yandere. He had a dangerous encounter with the Trinemesis a haunted Victorian mansion no later than 2014. There the TriNemesis gave him a “tumor-like device” in his brain, which Lilith has called some sort of “gift” that would allow him to control the alien weapon telepathically. He, however, lost most of his memories prior to and during the incident and was led to believe that he had developed an actual brain tumor, which no doctor was able to treat. Dr. Philip A. Rotschstein, Lilith’s employer, was able to "cure" him. The brother was told he was cured, but that he had to take regular medication from then on to prevent the tumor from coming back. He was asked by the Rotschstein Institute to participate in some tests that involved moving the TriNemesis with his mind. He was reluctant to use the weapon capabilities of the TriNemesis, however, and he was sent home.

Since then, he lived with his sister, who encouraged him to find a job and a girlfriend. He got an interview for a graphic design job at AppSir, Inc. in November 2017. Over the next few days he met Kara, Mia, and Darius. Shortly after Kara supposedly kills Mia, she knocks the brother out. He learns that Kara is another consciousness in his head. Shortly after, the TriNemesis destroyed a city while under Kara’s control, using the brother as a vessel. During this time, Kara tried to convince the brother--her assigned senpai--that this destruction was what he wanted. She also tried to get him to remember his life before they were attacked in the mansion. However, the brother persuaded Kara that true love didn't include forcing someone to do something. The brother (and Kara) fight back together against the Institute, using the TriNemesis to shoot Dr. Rotschstein and Lilith before Kara was forced to delete herself from the brother’s brain for her insubordinance.

After the city-wide TriNemesis attack, the brother got the job at AppSir and started to look for the real Kara Gentner. His story will continue in The Last Yandere 2.
at March 27, 2019