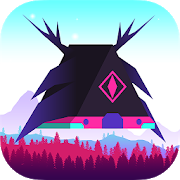 When Myles and Yanna first meet in Sorority Rites, Yanna talks about the effects of the TriNemesis in the mansion and those who enter it. According to her, it can change one’s perception, making them believe walls are moving. It is the cause of several deaths in the mansion. Its victims have no discernible traits or marks, as if their brains simply shut down. Survivors reported several symptoms, such as nausea, dizziness, and headaches. These survivors also claim that they can never get a good night’s sleep again, because they are always awoken by “something” that enters their home, always watching them.

On November 2017, Lilith’s brother/Kara Gentner controlled the TriNemesis, using it to destroy an AppSir building and the rest of the city, much to the delight of the Rotschstein Institute. However, Kara also used the TriNemesis to shoot down Dr. Rotschstein and Lilith.

The TriNemesis makes another appearance in DERE EVIL.EXE, as a manifestation of Yanna’s scariest memory. Much is still unknown about the nature and origins of the TriNemesis.

The TriNemesis can be spotted in DERE.EXE as a minor enemy made by Kara in level 5 to jump over to progress.
at March 28, 2019