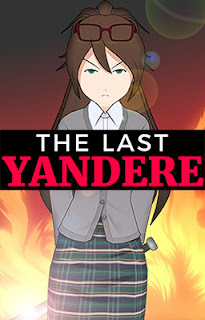 The Last Yandere is a visual novel developed by AppSir, Inc., released for mobile and PC platforms on November 18, 2017. The events of the game take place on November 2017.

The player takes the role of Lilith’s brother, who is never given a name. He is only labeled as “You,” meaning the player. This visual novel has one primary story to tell, although the player is given a few choices throughout the game. Two endings exist: a “bad ending” and a “true ending,” with two ways to reach the former, but only one way to reach the latter. The bad ending always involves Kara Gentner killing the protagonist for betraying her trust or rejecting her love. The true ending is the story that is considered canon to the AppSir universe.

Lilith’s brother muses about his recent past, which included memory loss, a diagnosis of brain cancer, and Lilith offering experimental treatment from Dr. Rotschstein at the Rotschstein Institute. The Institute asked him to participate in some experiments that involved him using telekinesis to move the TriNemesis, which he did, but he was reluctant to use its weapons. The brother is then given pills that Lilith and the doctor claim he needs to take daily to prevent the tumor from returning. Lilith interrupts her brother’s musing. The brother is living with Lilith, but she encourages him to move out once he finds a good job, as well as a girlfriend. The brother admits to being shy and laments that he will likely be single forever.

Lilith’s brother leaves home for the day to attend an interview for a graphic design job at AppSir, Inc. On the way, he finds a cake shop and has a pleasant conversation with the “cake shop lady,” Kara Gentner. At the AppSir building, Lilith’s brother meets Mia, an AppSir employee, who informs him that his interview was postponed until the next day. Lilith's brother considers asking Mia out on a date or a business dinner, which does gets accepted or not depending on the choice the player makes. After that Mia addresses the interview. She thought the brother knew about the interview being rescheduled since AppSir had texted him about this. Lilith’s brother then realizes he lost his phone. He runs back home to look for it, to no avail. He then returns to the cake shop by the AppSir building, where Kara comes up to him and returns his phone, which he left at the shop. Kara offers to take him out on a walk in the park.The two of them have a very serious conversation about their respective pasts, in which Kara reveals that she never got to meet her mother, and that all her friends died one day.

That evening, Dr. Rotschstein pays a visit to Lilith’s brother, asking if he feels ready to pilot the TriNemesis again. The brother is still reluctant, but expresses his willingness to do it in the near future.

The next day, Lilith’s brother returns to the AppSir building for his interview. There, he meets AppSir CEO Darius Guerrero, who is not in the best of moods. Mia had been killed at a nearby park the day before, and there were no leads in the case. Darius is slow to trust Lilith’s brother, but eventually asks him to come back for his interview at another time. Before he leaves, the brother notices an old arcade cabinet of PROGENITOR DERE. He feels compelled to play it, despite Darius mentioning that it never works. Shockingly, it powers on at the brother's touch. Darius told him to come back another time so they can see what the game is actually like.

Lilith’s brother meets with Kara again, and suspects that Kara killed Mia. Kara confesses her love to Lilith’s brother, making him very happy. He continues to enjoy his date with Kara, and the two of them take some selfies. Kara shares some cake with him.

The next day,  Lilith's brother returned to AppSir to try PROGENITOR DERE. He plays it, until the game's AI, AIRI, calls out the brother for killing Mia. He blacks out and finds himself trapped with Kara in a room. After another blackout, he finds himself at home. He tells Lilith about his new girlfriend. Lilith looks at her brother’s phone for the selfies they took, but says there is no girl in any of the photos. She takes him back to the Rotschstein Institute for “treatment,” and Kara appears again, knocking him out again and keeping him in a safe place.

Dr. Rotschstein and Lilith look on at her unconscious brother. Their conversation reveals much about what is really happening. They transferred the digital consciousness of Kara (the last surviving member of their Yandere Program) into Lilith’s brother’s brain, hoping that Kara’s more violent nature would make him better able to pilot the TriNemesis. Through him, Kara had used the TriNemesis to destroy the AppSir building, as well as the rest of the city. Kara then decides to defy the wishes of the Institute by using the TriNemesis to shoot down Dr. Rotschstein and Lilith. However, her defiance caused Kara to delete herself from Lilith’s brother’s brain. Before she left him, Kara asked the brother to look for the real Kara. Lilith’s brother gets the graphic design job at AppSir, and looks for the real Kara in his spare time. The novel ends with Lilith’s brother staying in what looks like a small wooden shack, and a woman he believes might be the real Kara arrives. This story will continue in The Last Yandere 2.
at March 27, 2019