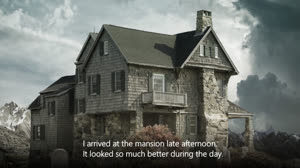 The mansion is an old Victorian era mansion that was said to be haunted by the spirits. It is just a few blocks away from the campus attended by Myles, Yanna, and Venice. TV shows dedicated entire episodes to it. It was said that the mansion could kill you and take the soul of anyone who entered it. It is featured in Sorority Rites and Sorority Rites House Tour.

When Myles and Yanna first meet in Sorority Rites, Yanna talks about the effects of the TriNemesis in the mansion and those who enter it. According to her, it can change one’s perception, making them believe walls are moving. It is the cause of several deaths in the mansion. Its victims have no discernible traits or marks, as if their brains simply shut down. Survivors reported several symptoms, such as nausea, dizziness, and headaches. These survivors also claim that they can never get a good night’s sleep again, because they are always awoken by “something” that enters their home, always watching them.

In 2014, Lilith’s brother visited the mansion (the reasons are currently unknown) and encountered the TriNemesis, which gave him a tumor-like device in his brain. Lilith and Dr. Rotschstein wanted to know if the same thing would happen to anyone else, so Lilith sponsored her niece Venice’s sorority as long as Venice lured people to the mansion on a regular basis. Venice’s first known victim was Yanna Curtis, who died at around June 30, 2018.

Shortly after her death, Dr. Rotschstein took a personal tour of the mansion, collecting paranormal data on Yanna and other spirits that inhabited the place. It was then that Dr. Rotschstein discovered that someone had broken into the mansion some time before. He also saw a hostile deer, two vicious dogs and an unnaturally giant spider, along with half a dozen smaller spiders.