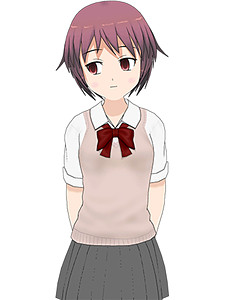 Myles Stone is the protagonist of Sorority Rites, which takes place during her second week of college on July 7, 2014.

Myles described herself as too shy to make new friends. She also briefly mentioned one of her “weird habits”: she loved to smell the page of every book she read. In spite of all this, Myles was not afraid to stand up to a bully when she discovered something terribly wrong. She stopped believing in ghosts and spirits at age twelve, which was why she was able to enter the mansion with relatively little fear. She also once expressed a desire to check out any old books the mansion might have, but decided to stay with Yanna instead.

Myles was on her second week of college on July 7, 2014. On that day, she tried out Dere Alpha, which was highly recommended to her by her "hyperverbal chatmate," E.N. Later that day, while at school, Myles accidentally stepped on Venice’s shoe, upsetting her. Venice pressured Myles to take part in an initiation rite for her sorority, which was to spend an entire night at the nearby mansion. Despite many rumors about the mansion being haunted, Myles wasn’t scared, just annoyed and frustrated.

While inside the mansion, Myles met Yanna Curtis, who had been pressured by Venice to complete the initiation a week before. The two girls talked about the mansion and the stories surrounding it before Myles fell asleep on the master bed. Later that night, Myles heard Yanna crying somewhere in the mansion, and Yanna explained that she had been killed by the TriNemesis the week before, and that Venice’s sorority had burned her body in the fireplace.

The next morning, Myles tried to confront Venice about Yanna’s death, but noticed Venice wasn’t listening to her. Venice ran home, and Myles followed her. By the time Myles arrived at Venice’s home, Venice had been killed by Yanna. Myles ran back to the mansion to discover her own lifeless body still lying on the master bed. Like Yanna, she had been killed sometime during her night at the mansion.

After about 40 days of roaming as ghosts, Myles and Yanna were both somehow sucked into Darius’s copy of DE**.EXE. On February 7, 2018, when DERE.EXE was released, Darius worked with the girls to try to delete Kara.

A few months later, in May 2018, the girls started appearing in certain levels in Darius’ versions of DERE EVIL.EXE. When the game released on July 3, 2018, Darius tried to convince the player to delete Yanna to try to bring Myles back to life. Whether the player chooses to delete them or not, Myles and Yanna were already prepared. Yanna had created several games within games so that only their avatars would be deleted, sparing the real Yanna and Myles in the game’s files.
at March 27, 2019