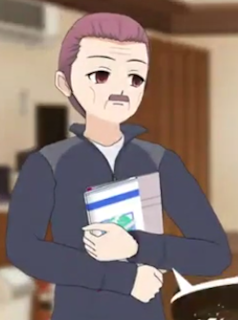 Jack Stone is the father of Myles Stone. He has likely had several jobs in a short time, since he and Myles had moved enough times to make it difficult for Myles to make friends in school. In 2014, Jack got a job at the Rotschstein Institute, so it’s possible he’s met Lilith or Dr. Rotschstein. Before getting this job, he lost his wife. Myles mentions that she was known by her peers as the “weird girl” with “strict parents.” On July 7, 2018, Jack quit his job at the Institute. While waiting for his daughter to come home, he tried out Dere Alpha, hoping it would help him relate to Myles more. He was rather shocked at the strangeness of the game.

Some time after Myles’ death at the mansion, Darius Guerrero met a depressed, inconsolable Jack without his wife or daughter, and possibly without a job (unless he found a new one by that time). He refused to believe his daughter was still alive in a video game. Some time between that meeting and July 3, 2018, Jack had moved to America and met another woman. While Myles was inhabiting DERE EVIL.EXE, she found a photo of her father and the woman smiling and celebrating American Independence Day.
at March 27, 2019