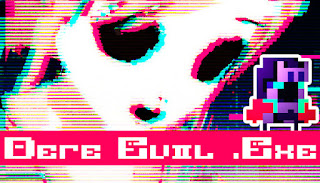 DERE EVIL.EXE is the second platformer game officially published by AppSir, Inc. It was released for mobile and PC platforms on July 3, 2018. In the game, the player controls an avatar dubbed “Knightly” by the developer, Darius Guerrero. Through dev notes, Darius asks the player to rescue a “princess” named Myles from an “evil entity” named Yanna.

The design of the game was worked on by the design agency Jagger & Jones, but Trevor Jagger's modifications to the game's prototype led to animosity between AppSir and the agency. Jagger distributed his modified version to two of his youngest employees, and Yanna's corrupted image is shown very subtly on the monitors of the employees' personal and work computers.

A majority of the game involves platforming, simple horizontal movement combined with jumping. There are a few areas of the game that deviate from this by putting Knightly in other game genres, such as a top-down RPG, a brick breaker game, and an “ice block puzzle” mode.

The player controls a character named Knightly, and is guided through the first level by audio cues from AIDE. After the first level, the player meets a girl named Yanna, who asks the player to stop playing the game. At the start of Level Two, the developer reveals the quest of the game: rescue the princess (Myles) from the evil entity (Yanna).

Near the end of the second level, the game shows glitches and several corrupted creatures chase Knightly before the game stops and shows a message from Yanna, asking the player if they’d like to play a bonus game. Regardless of the answer, the game begins Dere Quest, in which Knightly is ambushed by Yanna’s corrupted creatures. She proposes a second bonus game Derenoid, which is a brick breaker game. But again, Knightly is ambushed by corruptions. Yanna offers a third bonus game and the game appears to reboot itself, allowing the player to begin Level Three.

In Level Three, Darius explains that the corrupted creatures are reflections of Yanna’s scariest memory: the TriNemesis. This level features more challenging platforming sections divided by numerous iterations of the same house, but with subtle changes with each pass. Each time Knightly is inside the house, Yanna explains her story a little bit more, which includes the death of a 19-year-old girl named Venice, and Yanna later getting “sucked into” DE**.EXE. Yanna also continues to implore the player to stop playing the game. By the end of the level, Darius claims in a dev note that the right choice is to delete Yanna.

At the start of Level Four, Darius explains that a few years previously he had met Myles’ father, Jack, who was depressed and inconsolable. Darius is convinced that setting Myles free will make Jack happy again. AIDE starts to show signs of affection and care for the player, calling them “senpai.” This level ends in a similar way to the ending of DERE.EXE, in which the player character jumps through a grey barrier into a dark space. In this case, the space leads to the Limbo System, the edge of the game.

In the Limbo System, Yanna continues to antagonize the player, especially after Darius deletes AIDE for starting to act like Kara Gentner. AIDE is able to restore Kara before she is deleted, however. Knightly jumps from one limbo room to the next, surviving several attacks from Yanna before entering the Deep System, where the game’s files are held.

Gameplay in the Deep System changes dramatically, causing the player to control Knightly like an ice block puzzle (in which Knightly doesn’t stop moving until he hits an obstacle). Yanna continues her attacks, going so far as to create a mirrored Knightly in retaliation. Yet, the player is able to overcome all Yanna’s attacks and make it to the “core.”

Once Knightly reaches the core, Yanna takes control of him, threatening to delete him if Darius continues to try to delete her. She doesn’t trust Darius or the player, believing that after deleting Kara in DERE.EXE and AIDE very recently, he will end up deleting both her and Myles. Myles appears and explains that she doesn’t want to go back, knowing that her father had moved on and found a girlfriend sometime after his meeting with Darius. At this point, Darius pauses the game and asks the player to delete Yanna.

The player can choose to delete Yanna or spare her. If they choose to delete, Yanna and Myles are both deleted. If they choose to not delete, they get a call from Darius in which he promises revenge. In either case, Darius leaves the game, and it is revealed that Yanna and Myles had kept the player character in a copy of DERE EVIL.EXE within Derenoid, which was within Dere Quest, which was within the real DERE EVIL.EXE. Even if the player had chosen to delete them, only their avatars in the “bonus game” would have been deleted. If the player refused to delete, a scene after the credits reveals that Kara still exists, though she wonders where she is.

Accolades/Reception
Broke the Top 100 on the App Store (US) on launch day before being featured
Featured on Google Play's Indie Corner for the entire month of September and running for Editor's Choice
Featured on App Store's New Games We Love Won the 'Best of Gaming Award' from Edamame Reviews, and was given an S Rank and a score of 95/100
Received 5 stars from Touch Arcade's Editors Pocket Gamer's Game of the Week, and AppSir, Inc. was interviewed for their "Key People in the Industry" in PocketGamer.Biz
Covered by RockPaperShotgun, PC Gamer, Gamespark, and more
Still at 4.8 out of 5 stars on both Google Play and the App Store after thousands of reviews
at March 27, 2019