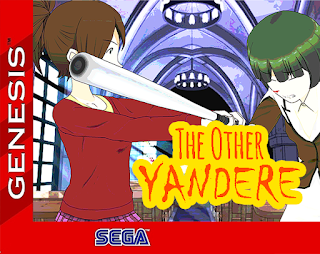 The Other Yandere is a very short visual novel created by Darius Guerrero on December 1999. It was intended for release on the Sega Genesis, but the game never saw an official release until AppSir, Inc. published a ROM for the game online on April 23, 2018. The game reveals the last words and thoughts of Kia, “the other yandere” who was killed by a 14-year-old Kara Gentner in 1999. Before her death, Kia talks at length about the nature of the Yandere Program and the ultimate goals of The Family, the group that runs the Rotschstein Institute. Her creators were Lilith, Dr. Rotschstein, and Bijuu, with Lilith as her handler in the event that she rebels. Kia also talks about Kara, the Institute’s favorite yandere.

The events of The Other Yandere took place in 1999, shortly before the game’s creation. According to the game’s title screen, the story was anonymously written, and later sold to Darius Guerrero.
at March 27, 2019